AntWoord in collaboration with the IPCI organised two debates between John Gilchrist and Yusuf Ismail (visit the IPCI) on the topic “Christian/Mulsim relations in a postmodern age” held on 14 and 15 May. At each debate there were between 200 and 300 people attending. The debates itself were a discussion about the various areas of mistrust existing between Islam and Christianity. There was quite a bit of irony in the different approaches and its immediate implications. The following is my impression of what occurred.

Gilchrist was much more conciliatory in his demeanor towards Muslims, emphasising the need for Christians to love Muslims and not to resort to demonising or rousing suspicion towards Islam, even in the face of fanatics and extremists on the fringe of Islam. In the second debate, Gilchrist said he wanted to help Muslims understand the central message of Christianity, and how Muslims should be able to relate to it since they shared the Old Testament history prior to the coming of Jesus. He therefore took great pains of explaining the historical run-up of an expected Messiah in the Old Testament and how the person of Jesus in the New Testament fulfilled and made sense of that expectation. Without Jesus the Old Testament is like a good story building up to a climax, but then ending abruptly and confusingly (this, Gilchrist told, was the impression that a Jew himself once confessed to him). In all of this Gilchrist made it very clear that the uncompromising theological difference between Islam and Christianity remains the person and work of Christ (i.e., the deity and salvific attainment of Jesus on the cross), but, said Gilchrist, it was not the aim of these debates to defend those views.

Ismail’s approach began with an exposition of how the Western world (and in particlular the secularised Christian culture in the West) attempted to exploit the fundamentalist fringe of Islam that created much of the deep mistrust between Muslims and Christians in general. In the second debate, however, he launched into a full attack on Christianity, emphasising the absurdity of the Trinitarian doctrine, the biased distortion and tampered nature of the Gospels in the New Testament and the untenable view of Christ’s divinity. In the end Ismail told Christians that Muslims’ theological distrust towards Christians and Christianity concerning these issues, can be resolved if Christians merely realised, as some other Christians (sic) do, that you can be a Christian without the concocted notion of the incarnation, i.e., that God had a Son or that God somehow became flesh in Jesus. He suggested that if Christians can do that, then both Christians and Muslims will be able to realise that they actually worship the same God and that there is opportunity for much harmony and community.

The irony of the differences in the approaches of these two debaters for me was this: For Gilchrist the way forward in dissolving some of the mistrust in Christian/Muslim relations was to encourage Christians and Muslims for a better understanding of each others beliefs – without compromising or minimising the fundamental differences. For Ismail the way forward in dissolving some of the mistrust was to encourage Christians to give up their core beliefs on the basis of what some unbelieving or liberal scholars say (the same scholars who would view the doctrines of Islam equally absurd). In comparison I simply had to wonder whose approach merely perpetuated further mistrust and whose actually aimed at bridging some of the gaps needed for respectful dialogue.

To see the video of these debates, go here. 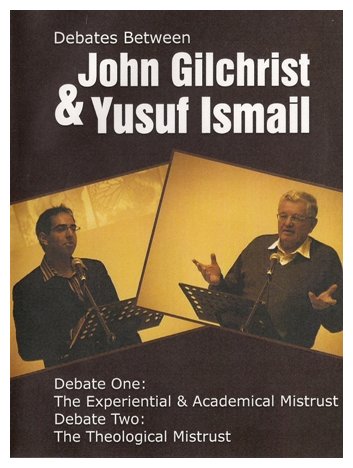