What is going on? A closer look at a curious phenomenon

I recently had the privilege of witnessing a couple of exceptional Christian minds engage audiences at several universities across South Africa. Professor John Lennox and Michael Ramsden visited on a speaking tour sponsored by RZIM and organised by several local entities.(1) Their public engagement, mainly on the topic of how science relates to faith in God, drew unprecedented crowds. The overwhelming interest became quite a phenomenon and many were asking: What is going on here?

I’d like to refer to and highlight a few of these events and then conclude with a few remarks by way of an answer.

Prof Lennox’s first time visit to South Africa began with the Vice-Chancellor’s open lecture at the University of Cape Town on the topic, “A Matter of Gravity: God, the Universe and Stephen Hawking”. The initial venue was fully booked in advance and then moved to accommodate more people. Even then overflow facilities had to be made available. Faculty of UCT attending were astonished at the remarkable turnout for this kind of lecture and many wondered: What is going on here?

Students of Stellenbosch University invited Prof Lennox to speak on “God vs. Science” at the university’s Endler Hall. Several hundred disappointed students had to turn around at closed doors as the venue quickly filled to capacity. I want to mention a specific incident at this event. At the beginning of the Q&A section an atheist spoke up, not to ask Prof Lennox a polite or probing question, but to accuse him of telling fabricated anecdotes. In a personal discussion afterwards, this atheist could give me absolutely no reason for his accusation, except that he simply “knew” it to be true. But why opt for creating such utterly groundless suspicion rather than a concern for reasonable argumentation? What is going on here?

Prof Lennox and Michael Ramsden also interacted with the students of UCT during three lunch hour talks. Topics such as “Is Faith a Delusion?”, “Christianity and the Tooth Fairy” and various others during a Q&A with Michael Ramsden, were explored. The UCT Student Free Society Institute, formerly known as the Atheist and Agnostic Society (2), countered with a presentation by George Branch, Emeritus Professor of Zoology. The topic was “Evolution: Scientific Advances and Appropriate Religious Responses” and several posters on campus advertised it as a response to John Lennox. The posters included various statements by atheists who have debated with Prof Lennox.(3) 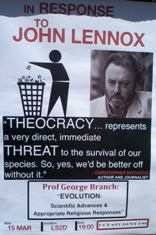 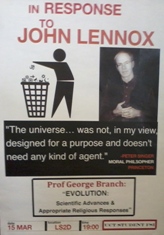 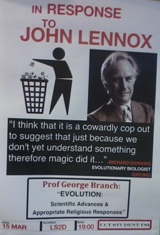 Here is the curious thing. Prof Branch has distinguished credentials worthy of a first rate Zoologist, but the organisers of this talk failed to notice that Prof Branch was also a devoted Christian. You can imagine the lifting of eyebrows, the dropping of jaws and embarrassing glances as Prof Branch mentioned this little fact during his talk in front of an audience of mainly atheists and agnostics!  Who wouldn’t be struck by the irony? For while Prof Branch and Prof Lennox might disagree on what precisely the “scientific advances” in evolutionary biology indicates, I suspect they would both, as Christians, have the same “appropriate religious responses” to the underlying assumptions of the atheists quoted on the posters printed by the UCT Student FSI. So what, exactly, is going on here?

So again: What is going on here?

It can easily be granted by all who have heard John Lennox and Michael Ramsden speak before that they are eloquent and thoughtful Christian voices. It seems to me, however, that it wasn’t simply that these gentlemen make a memorable impression wherever they go that draws the crowds. Something else stirs beneath the surface and catches the imagination.

Actually, it is not difficult to see what it is. Entrenched in the thinking of the average modern person is the idea of a sharp and irreconcilable conflict between science and faith in God. For many it is quite a rare and curious phenomenon to see such a notion exploded with such obvious skill and knowledge.

But here is the important part. Prof Lennox is absolutely right in pointing out that the real conflict lies at a worldview level, that the so-called conflict between science and belief in God is a pernicious and unrelenting myth to be exposed for what it is. Vociferous atheists like Dawkins and respected scientists like Hawking, are therefore simply misguided in trying to substitute science for God. By all means, let us discuss the merits of both atheism and theism, but let us not confuse (as some have done at the events mentioned) the nature, scope and advancement of science with atheism.

I wish to conclude by thanking John Lennox and Michael Ramsden for having thoughtfully engaged South Africans on important questions, patiently and respectfully clearing away misunderstandings, and commending Christianity in a way such that the gospel might again be heard with clarity. You are inspiring examples to emulate.

1 Some of the main local organisers to help make this RZIM initiative possible were Lex Loizides of Jubilee Community Church, AntWoord Apologetics Ministry and Dialoog Community.

3 I took photos of the posters put up all around campus. Here are the quotes in text format: Christopher Hitchens: “THEOCRACY… represents a very direct, immediate THREAT to the survival of our species. So, yes, we’d be better off without it.” Richard Dawkins: “I think it is a cowardly cop out to suggest that just because we don’t yet understand something therefore magic did it.” Peter Singer: “The universe…was not, in my view, designed for a purpose and doesn’t need any kind of agent.”

Who is John Lennox?