The conference was held at Kerk Sonder Mure in Centurion, which was kindly provided to the organisers free of charge. In itself I believe a charitable gesture and certainly not a cheap one. The venue is state of the art modern church buildings / auditorium with all the expected bells and whistles. Sound systems, lighting, stages, projection systems, CCTV in various areas, large auditorium seating +/-2000, other smaller conference rooms, kitchen areas, gardens, parking lots, guards on duty, foyer with book stalls, etc.

First impressions on arrival were formed by a large GDOP (Global Day of Prayer 2010) banner prominently positioned on the corner outside the building. organisers, participating speakers, presenters and audience members who were gathering within the building, however, presented quite a different picture. Wonderful how God works to enable His Truth to be promoted via all means. The venue certainly had no relevance to the message which issued from it; simply a set of walls enclosing a group of God’s people for a few hours.

Prof William Lane Craig, Pastor Ray Ciervo and Mike Willenborg, three Americans from what constituted the main body of the Faith and Reason team 2010, did presentations. Details of each presentation are far too extensive to mention here. Suffice to say that their impeccable preparations, evident depth of knowledge of the subject and most strikingly, their motivation by means of true faith made for an event which I will certainly not easily forget. Once again it glaringly exposes the dire need for quality impartation of the Word in our country, and the severe lack of guidance with which we currently struggle. Another fact which comes to mind is that these speakers needed no media assistance (TV, music, slideshows, side acts) to bolster their presentations.

If I may, here are a few points made, which have stuck in my memory: 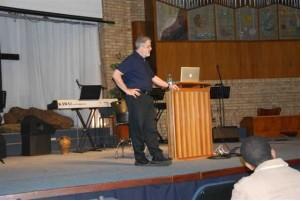 Past Ray Ciervo in his presentation on The Importance of Right Thinking Theologically, Doctrinally and Biblically:

He stated that the most important of all aspects for reproof (referring to 2 Tim 3:16,17) is having a complete and constantly refilling understanding of being able to recognise the differences between Essential Doctrine, Non-essential Doctrine and False Doctrine. One cannot know which is which unless one has a full understanding of Scriptural essentials. One must not study False Doctrine to recognise the falsities, but only study the Truth. Only then will the false become evident.

To me that all seemed pretty obvious, but having it amplified in the way that Ray did, leads one to re-examine the importance thereof and re-evaluate one’s own position in relation to the study of the Truth. We could be running on dangerously empty. We might be reading the fuel guage’s E not as Empty, but Enough, and the F not as Full, but as Finished   Sorry, I had to add that

He added that when dealing with other’s non-conformity to Biblical Truth, first and foremost one has to adopt a loving attitude before being Scripturally correctional. The reverse thereof is pointless and simply will not work. As Christians we have to accept that the world view exists, but not conform to it. Again obvious, but good to hear that the simplicity of these thoughts are foremost in the mind of such a prominent, respected and effective preacher. 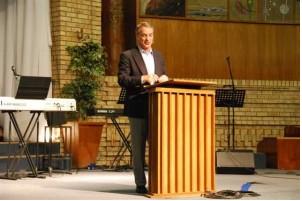 Prof Craig dealt with the atheist viewpoint of evil and suffering not being synonymous with God and that these things cannot co-exist:

Atheists hold that the extent of suffering in the world appears to be inconsistent with a loving God. Atheists therefore argue that because God is assumed to be all powerful and loving, it follows that He would prefer a world devoid of suffering.

Prof Craig pointed to the omission in the atheistic argument, of considering the free will given to man, which brings about suffering and actually proves His loving nature. The Prof gave some interesting examples. Given the events on D-Day toward the end of WW2, God surely decided to bring about greater happiness for the greatest number of people by allowing the suffering that took place on the beaches of Normandy. It would be impossible for us to measure the amount of suffering needed to bring about the happiness in the scope of time.

Another example was that of Mao Tse-Tung murdering 20 000 000 Chinese. Yes, that is twenty million. By allowing this, what we might regard as mass suffering, He brought about the greatest Christian revival in all of history. Today there are well over 100 000 000 Chinese Christians and their numbers are growing faster than anywhere else, ever. Where as, in contrast, in the Western world where there is far less suffering, the opposite is true. There is a falling away.

He also mentioned that the opposite also takes place regularly, when that which is regarded as advantageous or good at the time, could bring about immense suffering long thereafter in history. He also pointed out that God’s purpose with us is not primarily our happiness, but our knowledge of Him. God therefore uses suffering to draw people into His Kingdom.

The Apostle Paul who had many afflictions, moral and physical, reminds us in 2 Corinthians 4:17 of the comparative outcome, were suffering and evil not available. He also mentioned that Jesus undertook incomprehensible suffering to bear the cross of the whole world.

He stated that it stands to reason that evil and suffering actually PROVES the existence of God. Prof Craig ended that particular presentation with a poignant question to the Atheist:

If God is the only answer then to suffering, what then would be the answer to evil?

Pastor Ray Ciervo then presented a detailed reasoning for the need for Apologetics in a five part discussion.

Points he made, in a nutshell:  a) we are in a war, b)  the nature of our enemy, c) the kind of war, d) our weapons, e) how to win.   I made notes, but this will surely be available in recordings of the session. This is a must see.

Prof Craig followed with an enthralling talk on why truth cannot be limited to things which can be scientifically proven. He stated that there exists other types of truth which are presupposed and cannot be proven, but are universally accepted. These would include ethical truth, aesthetic (beauty of music, art, poetry, film) truth which are relative to the individual, metaphysical truth (how do we prove that we are not simply a programmed brain in a vat of fluid) and even some scientific truth (speed of light, or the continuum hypothesis for example).

Here is a quick look at these two scientifically accepted, presupposed “truths”.   The speed of light is calculated by measuring the time it takes for the light to return to the point from which it is emitted. Light starts at point A, reaches point B and returns to point A. The time it takes is measured along with distance it traveled. The speed of light can then be calculated correctly. What cannot be proven is that the speed of the light from point A to point B remains the same as the speed from point B back to point A! It is an assumption that it remains unchanged, therefore a presupposed truth.

In the other point he made, he refers to the acceptance of the truth that the universe is subject to the continuum hypothesis. This states that between any two points is another point. This cannot be proven but is also a presupposed truth.

Belief in God, however as the Prof points out, is a provable proper basic. Resulting from the fact that God can be experienced through the Holy Spirit, once that in evidenced by the individual, proving the existence of God becomes irrelevant. True faith is not only the believing THAT God exists, but believing IN God, which is experientially enabled. That, he rightly points out, is why there are so few Christians. Mike Willenborg, an absolutely brilliant, seriously physically disabled 22 year old in a wheelchair discussed the Resurrection and why it matters.

He was at a serious disadvantage, but not due to his bodily impairment, by any means!  His laptop computer had died, resulting in him having to do the entire detailed presentation from memory. He had no other notes and a discerning audience which included theologians! The introduction he was given by the MC earlier had pointed to his genius at Bible school despite his obvious disadvantages and that he was being touted as the next Prof who would be world renowned in the field of apologetics. The high regard which his much older and more experienced team mates have for him was well rewarded, as he delivered an inspired and powerful message from memory and thorough knowledge of Scripture. At times he almost “apologetically” mentioned that he did not have a good memory, but the direct opposite was quite evident. He certainly is blessed in ways that many able bodied would fail to understand. Remember the name; Mike Willenborg.

The conference ended with a Q & A session which lasted about an hour. The majority of excellent and obviously considered questions put to the panel, were from the younger African people in the audience. It seems that quite a few had flown in from neighbouring countries, judging by the French and other foreign accents. Mirroring the debate at the Pretoria University, the quality of the answers from the panel were impeccable and forthright.

The lunch packs were late and when they finally arrived, little time was allowed to eat them, as they were on a tight schedule due to flights out being considered.

Small gifts of appreciation were handed to the panel of esteemed guests by the organisers. Prof Craig was presented with a Bafana-Bafana T-shirt, which he is to wear on the day that South Africa plays in the world cup against USA.

Attendance I estimate at around 700, less than I expected. But then again where there are only two gathered in His name….awesome!!   The Lord sent a light warm rain as the last of the cars exited the parking area.

(This review was originally written on http://4loveofthetruth.wordpress.com and has been republished with the kind permission of the author.)